Marfond is a buddhist retreat center, located in the south-west of France (the Dordogne). It was donated to Gendün Rinpoche in 1996. He gave it the name Dhagpo Dedrol Ling (The Place of Ease Resulting from Inner Freedom) and wished it to be a non-monastic center for long term retreats. Three traditional 3-years-retreat cycles have taken place so far while the rest of the community divide their time between retreat and activity.

Since the very beginning the lineage Lamas like Gyalwa Karmapa, Shamar Rinpoche, Beru Khyentse Rinpoche as well as Jigme Rinpoche and the young Tulku of Gendün Rinpoche have been visiting the place regularly giving empowerments, transmissions and guidelines.

Since the project started Lama Walli has been participating in taking care of the center and for a few years now she has been assisted by her husband Lama Chris in this activity.

Under the guidance of several resident teachers a community of lay practitioners participate in the activity of the center and engage in the study and practice of the Dharma, Buddha’s teachings.

In this place people who already have a well-founded buddhist background can deepen their understanding of the Dharma. Like this the place fulfills its aim to preserve the precious teachings of the Karma Kagyu Lineage, which is one of the four schools of Tibetan Buddhism.

One of the first projects in Dedrol Ling was the building of a Stupa following the wish of Gendün Rinpoche. He said it would be the support of the center, as […] 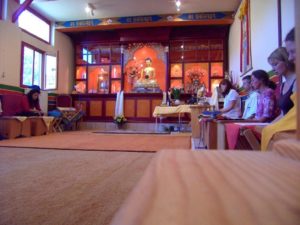 Thanks to the generous support of many people, we have been able to build a bigger meditation hall. Here group practices are held and teachings are given regularly. It was […]

A Drubkang is a retreat building where people can practice meditation intensively in a strict and closed manner. From 1999 to 2010, three cycles of 3-year-retreat took place in Dedrol […]

Since 2008 we started building a couple of wooden houses, so that people who have already lived and practised in Dedrol Ling for some years can continue with retreat and […] 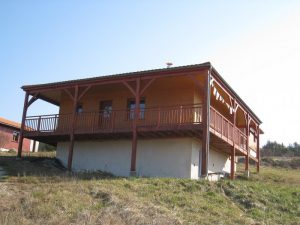 We feel very fortunate that the Karmapa/Lama House project has come to fruition and that the main construction was completed at the end of 2010. After about two years of […]

Impressions from the place and the people